Startup World Cup is a global conference and competition with the goal of bridging startup ecosystems worldwide. It is organized by Pegasus Tech Ventures, a Silicon Valley-based multinational VC firm. More than 60+ regional events are held across North America, South America, Europe, Africa, Asia, and Australia, leading up to the Grand Finale in Silicon Valley, where the global champion will be awarded a USD $1 million investment prize.

"This is such an honour for us," said Michael Cheng, Co-founder of Lumen5, "our 45-person team has been working tirelessly over the years to develop video creation solutions for our one million users and we are absolutely thrilled to receive recognition of this caliber from the startup community."

This is the second year that the Canadian Regional Winner is a Vancouver-based company. Last year Beanworks, led by Catherine Dahl, CEO and co-founder, earned that honour. Lumen5 is invited to represent Canada at the Startup World Cup Grand Finale in September 2022 in San Francisco and will compete alongside 60+ other startups from all over the world for an opportunity to win a US $1 million investment prize.

Companies were chosen based on several key factors including product/service offering, depth of management, market opportunity, business model and diversity of the management team. Companies were given the opportunity to include information on how the pandemic has impacted their business and how they are building for success.

“We saw a 14% increase in applications from all regions of Canada,” said Lauren Linton, Executive Director of CIX. “The surge in applications shows that Canadian startups are keen to show off their innovation and get back to business. It’s a very impressive cohort this year.”

“Investors have been having a difficult time accessing deal flow due to the pandemic, and this list of curated companies helps them identify hot startups to target,” added Linton.

The Founders/CEOs will present virtually at CIX Digital Summit on Oct 27-28 2021 to over 1000 investors and peers in the North American technology ecosystem.

CIX's 2021 Innovator of the Year Announced

The CIX Innovator of the Year Award is given annually to a Canadian company that disrupts and transforms an industry in profound ways. Past recipients of the Award have included Miovision, Lightspeed, ecobee, Real Matters, Wattpad, Shopify, Vision Critical and Desire2Learn.

At the core of the Trulioo mission is financial inclusion -- much of the world does not have access to identification at all, problematically excluding them from accessing basic financial services, and other essential resources in an increasingly digital-first world. The company’s mission is to build a robust digital identity network that taps into reliable data sources and tools to verify individuals around the world, ensuring everyone can participate in the digital economy.

Trulioo was founded in 2011 by Tanis Jorge and Stephen Ufford and is headquartered in Vancouver with offices in Austin, San Diego and Ireland.

“The demand for digital identity verification has skyrocketed over the past 18 months after businesses were forced to adapt and transform their business to a digital-only environment.” said Steve Munford, Trulioo’s CEO. “Unfortunately, this also created more vectors for fraud and attracted bad actors looking to exploit the increasing dependency on online transactions. That’s why it’s critical to establish a basic premise of trust and safety online, starting with strong identity verification procedures and processes.”

Munford continues to explain “Digital identity provides a fundamental way for everyone to interact safely and securely online. Trulioo’s overarching mission is to create an end-to-end identity platform that will encompass a variety of attributes to reliably and securely verify everyone on the planet”.

“We’re proud to celebrate a series of milestones in 2021, including Trulioo’s 10th anniversary. We announced our landmark Series D round of financing led by TCV in June and continue to grow across all functions of the company. Now we’re thrilled to be named the Canadian Innovation Exchange’s Innovator of the Year, a major distinction amongst an impressive stable of innovative Canadian firms,” said Munford.

“Trulioo was recognized as a CIX Top 20 company in 2015 and we have been proudly watching Trulioo grow and succeed,” said Lauren Linton, Executive Director of CIX. “Trulioo absolutely deserves this recognition.”

Canada’s Minister of Innovation, Science and Industry, The Honourable François-Philippe Champagne, has been invited to present the award virtually to Steve Munford at CIX on October 27, followed by a keynote fireside chat.

You're invited to a special virtual CIX Open House where we will announce the 2021 CIX Top 20 Early & CIX Top 10 Growth companies. 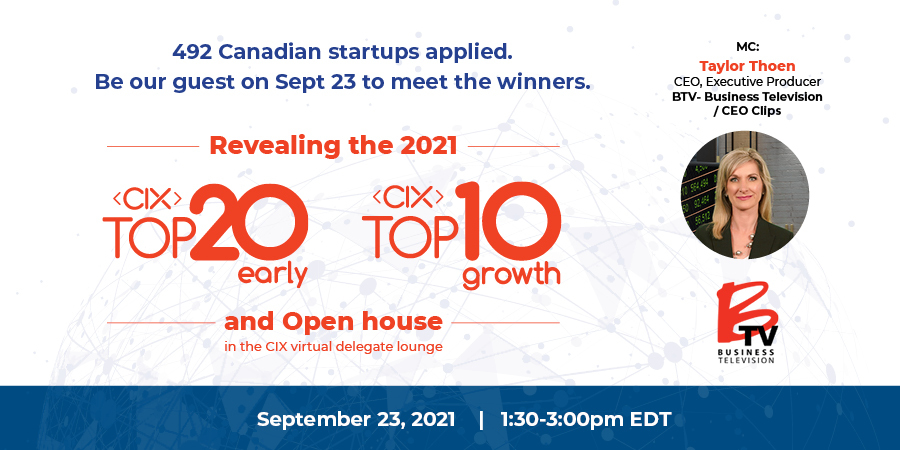 Please be our guest on Thursday, September 23 for the announcement of Canada’s most innovative tech startups followed by networking in the CIX virtual Delegate Lounge.

Prior to the reveal of the CIX Top 20 Early and CIX Top 10 Growth inductees, we will walk you through the cool new networking features of CIX’s event platform.

We encourage you to join us for this exciting announcement and catch up with some networking with founders and investors.

Our team will be on hand at the meeting tables to answer any questions you might have.

RSVP for free by Sep 15 to make sure you are on the list.

Thank You to CIX’s 2021 Selection Committee!

A special thank you to CIX's 2021 Selection Committee of 100++ investors who took time out of their valuable August schedules to evaluate the impressive caliber of submissions to CIX’s TOP 20 EARLY and Top 10 GROWTH awards program.

You may see the 2021 Selection Committee judges HERE 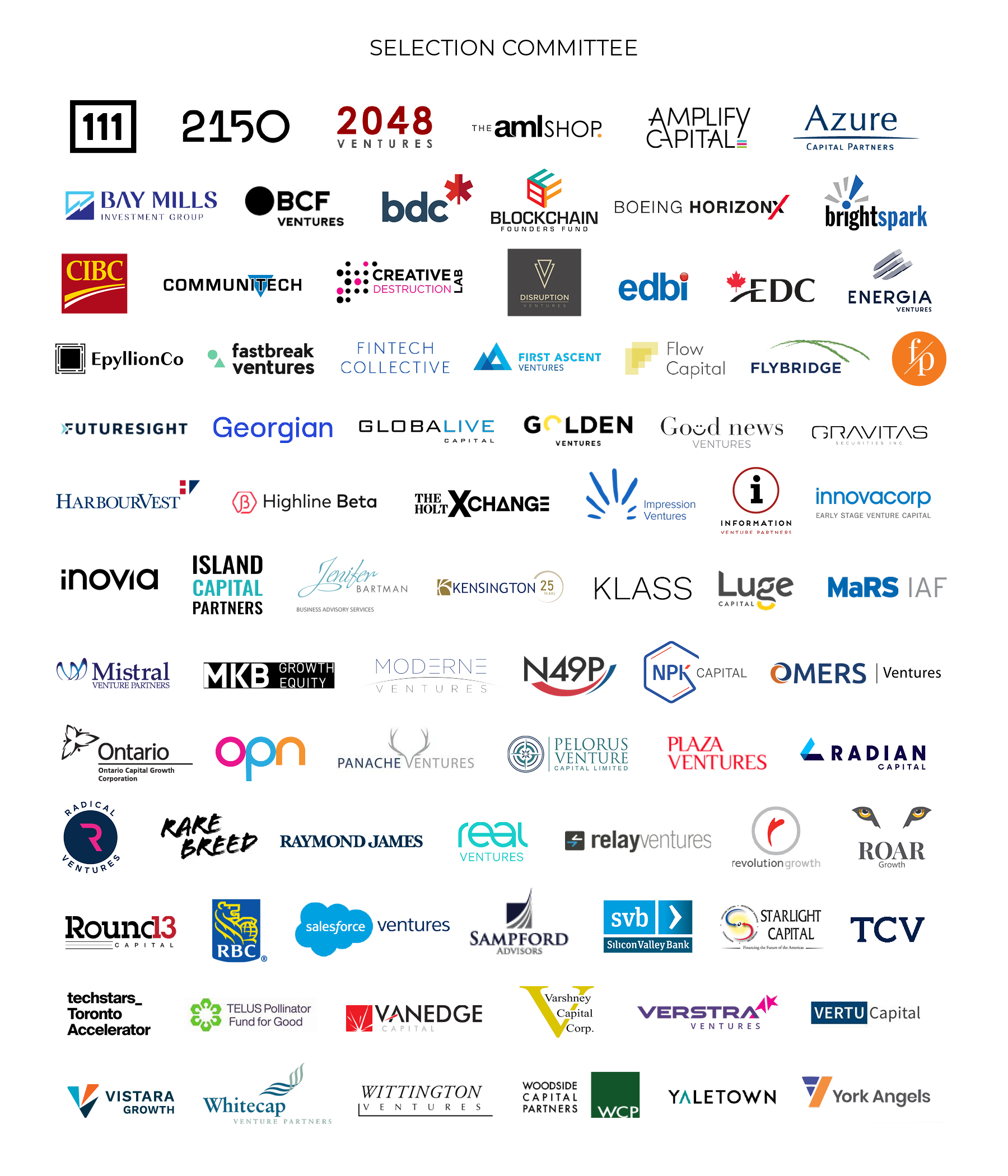 The CIX awards platform is 100% digital so our judges were able to review the 492 applications from the safety of their homes, cottages, boats, tents and wherever else they may have been.

The increase in submissions this year is a testament to the desire for companies to get back to business. Applicants ranged from coast to coast, all stages and a 15% increase in women-led companies.

Our startups need help, so this year CIX will have more founders on the virtual stage and structured networking spaces to connect founders, investors and partners.

Today, CIX Canadian Innovation Exchange announced that it has continued its exclusive partnership with Startup World Cup to host its Canadian regional competition. The 2022 regional competition will be held on October 27-28, 2021 as a part of the annual CIX event in Toronto.

Startup World Cup is a global conference and competition with the goal of bridging startup ecosystems worldwide. It is organized by Pegasus Tech Ventures, a Silicon Valley-based multinational VC firm. There will be 60+ regional events across North America, South America, Europe, Africa, Asia, and Australia, leading up to the Grand Finale in Silicon Valley, where the global champion will be awarded a USD $1 million investment prize.

As part of the program each year, Startup World Cup Canada Regional judges attend CIX and select a winner from the CIX Top 20 Early recipient companies who will represent Canada at the Startup World Cup Grand Finale in San Francisco in September 2022.

In 2020 the judges selected Beanworks, from the final CIX Top 20 Early companies, and Catherine Dahl, CEO and co-founder of Beanworks accepted the award on Oct 21 at CIX Digital Summit and is invited to represent Canada at the Startup World Cup Grand Finale.

Firstly, we hope you are coping with the pandemic and you and your loved ones are safe and healthy.

CIX Digital Summit will be virtual and interactive, taking place over 2 days Oct 27-28, 2021. We have built a state-of-the-art interactive platform for our community to present, network in small groups, meet 1:1 with investors and make new connections that matter to your business.

We know that supporting Canadian tech entrepreneurs is needed now, more than ever, and we want to support you.

Applications are now open for the CIX Top 20 EARLY and CIX Top 10 GROWTH awards program and here are the reasons you should apply:

• The opportunity to join the impressive alumni of 300+ of Canada's most promising startups including Axonify, Dialogue, Vendasta, Vidyard, Wattpad, Wave, Wealthsimple,...
• Your company will be seen by 100+ investors who are the judges.
• Selected companies will present virtually to over 650 at CIX, including over 250 investors and corporates.
• CIX Top 20 Early companies are the short-list for Canada for the Startup World Cup global competition.
• Guaranteed 1:1 meeting with investors
• In the past two years, 38% of CIX Top 20 recipients received funding as a result
• All applicants receive a free Hockeystick account
• No travel costs this year!

CIX TOP programs are Canada's largest national showcase of the hottest and most innovative tech companies.